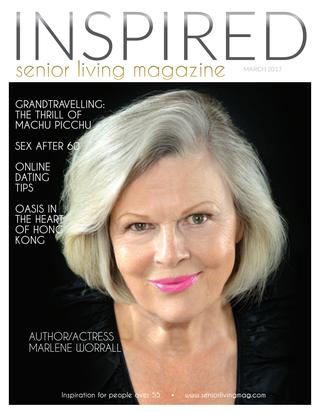 In 1980, while residing in New York, Marlene had a spiritual awakening. Billy Graham spoke the salvation message on TV. The Holy Spirit moved upon her, she said the sinner’s prayer, repenting of her worldly lifestyle with great travail and sorrow. Newly awakened, and determined to live for the glory of God, she began a new life.

Moving back to Vancouver, British Columbia, she embarked on a real estate career, but continued working on her singing, studying with the late Lila McCormick, retired opera singer. It was there that she met her much-younger hubby, who enjoyed singing while he played his guitar. Tragically, the brilliant, witty, charming Steve died of a massive heart attack at age fifty-seven.
Marlene moved to New York after the long-running, hit musical, Promises, Promises, in which she’d been featured with Tony Roberts and Betty Buckley at the Prince of Wales theatre, in London’s West End, closed.
Having immigrated to L.A. from Vancouver, Canada at nineteen, she worked in film and on stage, preferring the latter. At age six she began performing for neighbors, wearing crepe paper costumes lovingly sewed by her musically gifted mother. In grade five, she wrote, directed, produced and starred in a one-act play, which her teacher allowed her to stage during lunch hours, along with a variety show she cast using talented kids from the lower grades. Side note from Marlene: I’m sure the play was terrible. I don’t think it had a plot!
Also, in grade five, the teacher asked the students to write a short story. Memorably, her teacher insisted she didn’t write the story she handed in. She told her to write another story, while she watched. She did and received an apology from her teacher.
The first time Marlene, as a youngster, walked into a darkened theatre, memorably, she sensed it would be part of her destiny. It’s hardly a surprise then, that her debut novel Angel in Shining Armor features a teenager with ambitions to become a performer, despite her alcoholic and promiscuous Mom dragging her down.
Marlene began writing, while working as a real estate agent in Vancouver, Canada. Her first non-fiction book, titled Gold Nuggets, consisting of inspirational short stories and poems was published in 2007. She booked a number of speaking engagements and book signings at book stores and other venues in Palm Desert, California where she wintered.
Bitten by a burning desire to write, she quit a thriving, lucrative real estate career, and began writing and attending writing conferences, including Mt. Hermon, Florida Christian Writer’s Conference, ACFW in Dallas, Texas and also Speak Up with Carol Kent, etc. She embarked on a mission to write for the glory of God.
Cynthia Hickey of Winged Publications, AZ., USA published Angel in Shining Armor, as well as a novella, Love Found in Manhattan in 2017. This was followed by the publication and release of Sagebrush Ranch Series (3 novels) and The Mystery of Bedford House, a novella.
Marlene adapted Angel in Shining Armor for the screen. It will soon be a major motion picture. She has also written three other screenplays. Her completed memoir On Fire for God is currently being submitted to agents and publishers. She is optimistic that she will soon obtain an agent and contract for the book’s publication.

A few wonderful notes from my readers.
A fantastic read. I did not want to put the book down.
Bev Wallin, Author and M.A. Psych.
Goodreads 5*
Such an amazing gripping story. It was hard to put down once I started. Such a good read!
Nikola Steer
Amazon 5*
Exciting right from the beginning to the end.
Gypsy
Amazon 5*
Angel In Shining Armour is beautifully written and extraordinary. This is the novel I’d recommend everyone to read.
Miriah Reitmeyer
Goodreads 5*
Angel in Shining Armor is a wonderful story of true romance.
Written with a descriptive flair. The story draws you into the characters’ lives. It is a story that is difficult to put down once started. This is a must read.
Jo-Anne Watson

Where to Buy My Books

You can purchase any of my books from the below shops

Stay Up To Date

Sign up to receive Marlene's Exclusive News and Updates.
We use cookies on our website to give you the most relevant experience by remembering your preferences and repeat visits. By clicking “Accept All”, you consent to the use of ALL the cookies. However, you may visit "Cookie Settings" to provide a controlled consent.
Cookie SettingsAccept All
Manage consent

This website uses cookies to improve your experience while you navigate through the website. Out of these, the cookies that are categorized as necessary are stored on your browser as they are essential for the working of basic functionalities of the website. We also use third-party cookies that help us analyze and understand how you use this website. These cookies will be stored in your browser only with your consent. You also have the option to opt-out of these cookies. But opting out of some of these cookies may affect your browsing experience.
Necessary Always Enabled
Necessary cookies are absolutely essential for the website to function properly. These cookies ensure basic functionalities and security features of the website, anonymously.
Functional
Functional cookies help to perform certain functionalities like sharing the content of the website on social media platforms, collect feedbacks, and other third-party features.
Performance
Performance cookies are used to understand and analyze the key performance indexes of the website which helps in delivering a better user experience for the visitors.
Analytics
Analytical cookies are used to understand how visitors interact with the website. These cookies help provide information on metrics the number of visitors, bounce rate, traffic source, etc.
Advertisement
Advertisement cookies are used to provide visitors with relevant ads and marketing campaigns. These cookies track visitors across websites and collect information to provide customized ads.
Others
Other uncategorized cookies are those that are being analyzed and have not been classified into a category as yet.
SAVE & ACCEPT
Powered by